Play-And-Earn enables users to monetise time spent on entertainment and exchange assets obtained, created, or purchased in the game. In Legends of Elysium players will be able to earn $LOE tokens in various ways, such as daily and weekly quests, one-time achievements, being ranked in a premium position in weekly league competition, winning tournaments and few more. Earned tokens can be used in game, to enhance your hero and become even more competitive, or traded on exchanges for other assets.

Initial Legends of Elysium Treasury has 30% of the total supply of $LOE tokens. Tokens will be gradually released to players over time. The number of tokens earned by players depends on various factors.

Players will generate the rewards from:

A considerable amount of tokens spent on in-game transactions such as: buying items in the marketplace, paying for the entry fees to the Battlefield, purchasing Tickets for Tournaments, or purchasing new single player Adventures, will be automatically transferred to the treasury pool following uniquely designed delayed gratification mechanism, making it self-sustainable in the long-term.

Game Treasury is divided into several pools, which are described below. Future development of the game and implementation of new models, such as Guild Wars, may result in adding new pools, changing the percentage distribution, or removing one of existing pools to ensure the self-sustainability and stability of the ecosystem. 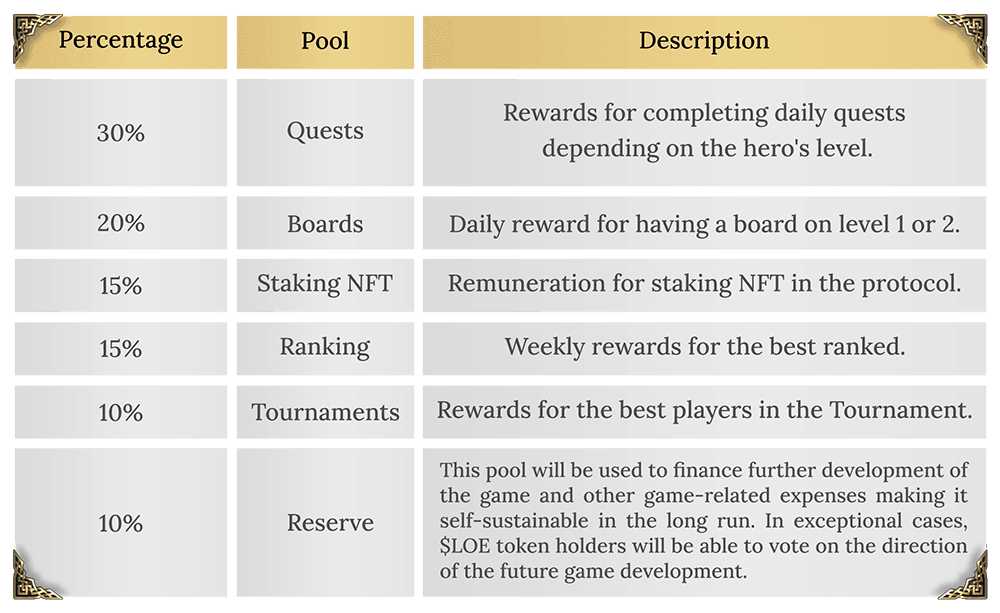 Additionally, 1% of the in-game transactions will be diverted to the separated pool, before the tokens are distributed to the Treasury. Through governance voting, the community may decide to burn the tokens creating a deflation process in $LOE total supply.

The pool will be mainly powered with: